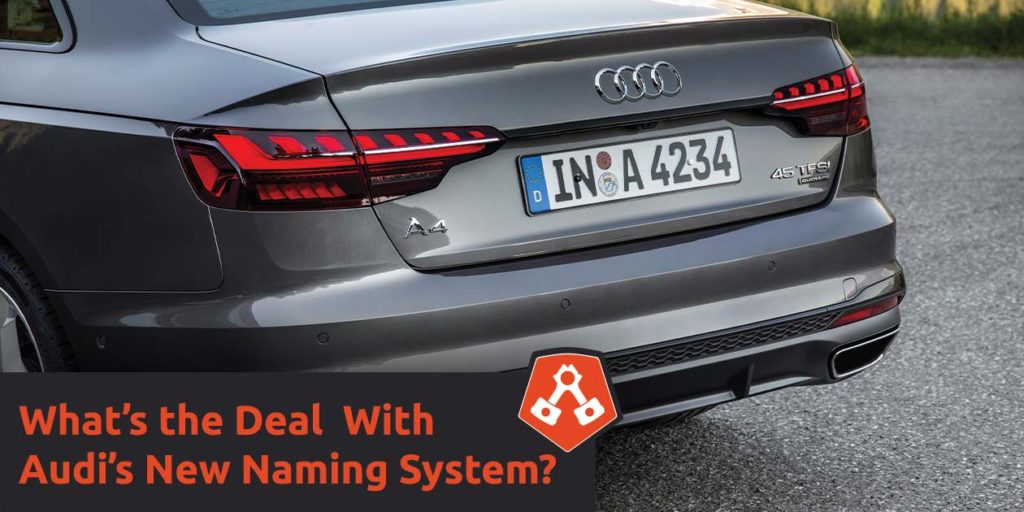 The Audi model designation nomenclature has remained relatively unchanged for the last 20 years. Audi vehicles use a combination of letters and numbers to designate the model and engine. This post will go over both the model naming scheme, which has not changed, and the new power rating system that replaces the engine displacement badging.

If you look at the rear of any Audi model, you will see the model designation on the left-hand side. The letter indicates the type of vehicle. This is the breakdown of Audi model name designations.

A: Standard sedan, hatchback, or wagon

TT/TT S/ TT RS: The TT designation is used for Audi’s sports coupe. The three variants of the TT follow the same performance pattern as the sedans.

The model letter is followed by a number. The number is an indicator of the physical size of the vehicle. For example, an A4 is a smaller vehicle than an A6. The performance versions are based on the chassis of the standard model (an RS6 is based on an A6, but optimized for high performance).

In the United States, the numbers used range from three to eight for all body styles:

Audi and Volkswagen both used badging vernacular such as “2.0T” or “3.0 TFSI” on the back of their cars. These designations indicated the displacement of the motor in liters and whether or not it had forced induction (turbocharged or supercharged). A car with a 2.7T badge would indicate a 2.7-liter turbocharged engine. In the case of diesel models, the badging simply said TDI

Recently Audi has changed the naming scheme it will use for indicating the engine in its vehicles. Instead of showing the displacement, Audi models will now use a numeric system where each number correlates with a horsepower range, followed by an indication of whether the car is gas, electric, or diesel. The list below explains how Audi’s new naming system is broken down.

For example, an Audi A4 will no longer carry just a TDI badge. Instead, depending on the power level, the rear of the car will be badged “35 TDI”.

In the future, all vehicles in the Audi range will use this naming scheme. Now, when you see two Audi’s, one with 45 TFSI and the other with 55 TFSI on the back, you will know these numbers refer to how powerful the car is.

Alex’s Autohaus is an independent Audi specialist in Midvale, Utah. If you are looking for an alternative to the dealership, give us a call! Our technicians have the skills and training needed to work on all models in the Audi lineup. Give us a call or schedule an appointment today!