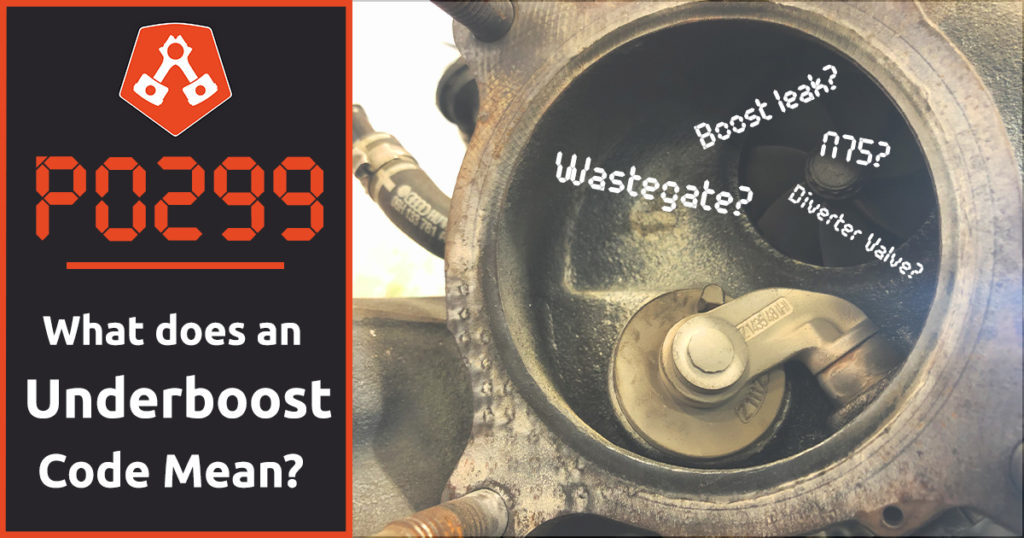 Your check engine light is on, your car is not accelerating like it used to, and maybe you hear a hiss, whine, or rattle coming from the engine bay when you’re driving. Unsure of the problem, you get the code read by a mechanic and learn the check engine light is reading out a P0299 code which says your turbo/supercharger has low output.

A P0299 code is triggered when the ECU of a turbocharged or supercharged vehicle detects an underboost condition under operation. The ECU monitors engine vacuum and intake manifold pressure with a MAP (manifold absolute pressure) sensor and in some cases a boost pressure sensor

What is an underboost condition?

To understand what causes an underboost condition, it is important to know how the charge system works when it is functioning properly. A turbocharger is an air pump driven by exhaust gases, pressurizing the air entering the engine. More air allows more fuel to be burned during a cylinder’s combustion stroke. Superchargers are driven by the engine instead of exhaust gases, but also work to pressurize intake air.

An underboost condition occurs when a hardware or software issue prevents the engine from reaching its target boost level. The issue causing the code can be a minor problem taking minutes to fix, or a more severe one requiring an invasive procedure to correct.

Several symptoms can occur during an underboost condition

The primary symptom seen when a car is throwing a P0299 code is a loss of power. The turbocharger or supercharger is unable to produce the boost pressure requested by the ECU. As a result, the car will feel sluggish and slow compared to when it is functioning normally.

A P0299 code can cause a car to go in to limp mode. Limp mode restricts the power output of your vehicle when the ECU senses conditions outside its normal operating range. Limp mode is a safety measure designed to prevent engine damage occurring while there is an issue present.

Lastly, a check engine light will be on, allowing the P0299 code to be read.

Anything preventing the ECU to read the required amount of boost pressure can trigger a P0299 code. Here are some of the more common causes:

The simplest cause of a P0299 code is a boost leak. Boost leaks occur when pressurized air escapes the charge system AFTER the turbo and BEFORE entering the engine. Boost leaks can happen when charge hoses wear out, or at connection points between hoses and other components like the turbo outlet, intercooler, and throttle body. Wear and tear over time can damage these components, and incorrectly connected hoses can come apart, causing a leak. This is a great first place to look when a car throws a P0299 code, as this issue can be resolved relatively quickly and easily.

If the source of pressurized air (the turbocharger or supercharger) fails, the vehicle will be unable to achieve the required boost pressure. Turbochargers spin at very high RPMs and operate under extreme heat conditions. These conditions can cause the turbine shaft seals to wear out and leak oil, and eventually, the turbo will fail. A noticeable whining sound can go along with a failing turbo, and if enough oil is leaking past the seal, black smoke can come out of the tailpipe.

When the wastegate, wastegate actuator, or actuator arm fails to function properly, an underboost condition can occur. Wear and tear can cause play in the wastegate lever, preventing the valve from creating an effective seal. Without a good seal, the turbo will be unable to build boost effectively because some exhaust gas will be bypassing the turbine.

The diaphragm in the wastegate actuator can become damaged as well, preventing the wastegate from closing as it should. Damage to the actuator arm can also impact the wastegate’s ability to close, although this is not common.

P0299 codes occur on stock vehicles frequently. Once a car has been modified and tuned, it will likely be making higher boost pressure than it did when it was stock. Higher boost puts extra stress on all the components in the charge system, increasing the likelihood of failure and an underboost condition. Modifying your car doesn’t guarantee any of these components failing, but the chance of an issue arising will be higher.

With an understanding of the potential causes of an underboost condition, you can begin to examine the components that may have failed. Some causes are relatively easy to fix in the driveway, while others require extensive work and time to complete. If you are unsure of the cause, we can help. We run into cars throwing P0299 codes frequently at Alex’s Autohaus, and we can quickly diagnose the problem and get it repaired.

Schedule a diagnostic appointment today to figure out what is causing the P0299 code or any other issue with your vehicle. Customers all over the Salt Lake City and Park City area trust our technicians to service and repair their European vehicles.