What is an Oxygen Sensor? 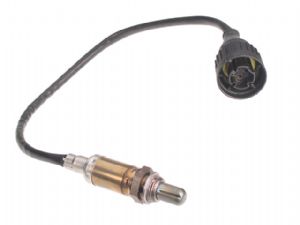 An oxygen sensor is an electronic device that helps modern fuel injected engines control the air to fuel ratio of your engine.  The ideal air/fuel ratio is called the stoichiometric ratio.  This varies by the type of fuel, but the most common ratio is 14.7:1 for gasoline engines.  A ratio lower than this indicates a lean fuel mixture (not enough fuel), and a higher ratio is a rich fuel mixture.  The oxygen sensor corrects this depending on the type of sensor.

Oxygen sensors can broadly be defined as being either wide-band or narrow-band.

A narrow band sensor is calibrated to know three things, rich, lean and stoichiometric.  As the car is running the sensor reads the oxygen concentration compared to atmospheric and sends a signal back to the vehicles computer.  If the mixture reads rich the computer reduces the amount of fuel, and if lean it adds fuel.  A narrow band oxygen sensor essentially acts like a switch to the car to get the correct air to fuel ratio.  The sensor doesn’t know the exact ratio only which side of stoichiometric that it is.

A wide band sensor is a much more sophisticated sensor that can tell you the exact air/fuel ratio of the car.  This is helpful in improving emissions, fuel economy and performance.  The idea is still to get to stoichiometric , but a wide band does it much more precisely.  Instead of an on/off switch moving rapidly back and forth think more of a dimmer switch that refines to exactly what the car needs.

Let Alex’s Autohaus be your source for auto repair in Utah.