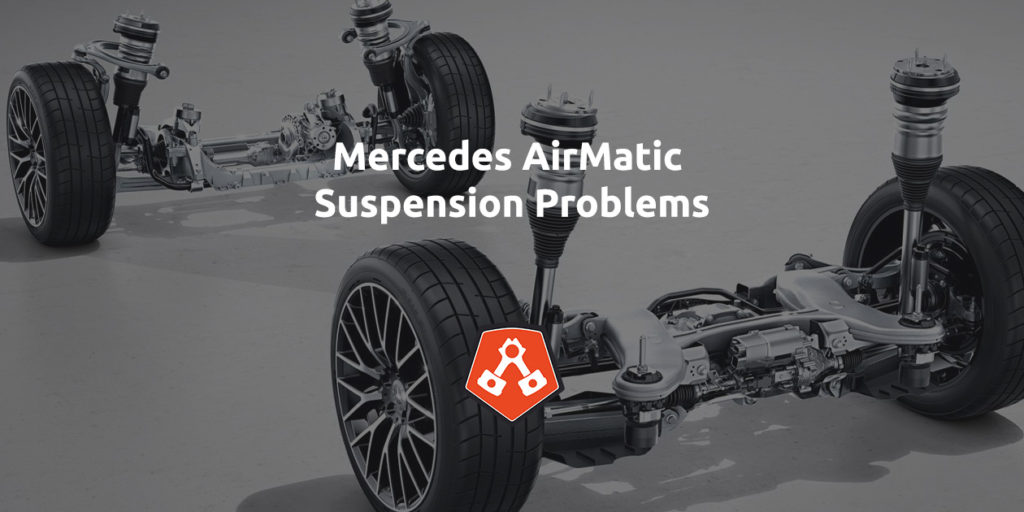 Mercedes Benz AirMatic Suspension provides remarkably smooth handling, flexible ride height, and self-leveling capabilities that ordinary suspension cannot. Using an electronically controlled airbag, AirMatic can adjust each air spring in as little as 50 milliseconds and will change based on road conditions and how you drive.

AirMatic suspension offers some big improvements over conventional systems, but the added complexity means more things can go wrong. In this article, we will go over the most common issues and symptoms Mercedes owners experience with AirMatic suspension.

How Does AirMatic Work?

AirMatic suspension uses a system of airbags, sensors, hoses, and an air compressor. The system utilizes a valve block to distribute air to the struts, and a reservoir tank to reduce reliance on the air compressor. Level sensors relay axle height to the AirMatic system, while acceleration sensors calculate vertical and horizontal acceleration.

Together, these components allow AirMatic to make on-the-fly adjustments to the suspension based on road conditions, vehicle speed, and how you drive.

Failed or failing AirMatic systems can cause several problems. Your vehicle may sag low to the ground or sag in one particular corner. You may also notice a change in how your vehicle rides, or hear new noises from the suspension.

There is a tradeoff for all the suspension control that comes with AirMatic. The system has many more components than traditional suspension, opening up more opportunities for parts to fail.

The majority of problems that arise with air suspension systems like AirMatic involve an air leak.

Leaks in the Air Struts

Over time, the airbags in the suspension can become worn out and start to leak. Depending on the severity, the vehicle may have trouble keeping the bag filled with air. This can lead to one corner of the car “sagging” or sitting noticeably lower than the other corners.

Leaks in the Air Hoses

Another common failure point is the air hoses running from the valve block to the air strut. A leaking air hose will produce similar symptoms to a leak in the air struts.

The air distribution block can also leak and fail. When this happens, it will generally impact one corner of the vehicle.

Typically the air compressor will fail because of a leak elsewhere in the system. The compressor can burn out trying to maintain pressure in a system with a leak.

Having Problems with your Mercedes Air Suspension? Stop in at Alex’s Autohaus!

Alex’s Autohaus is Utah’s premiere independent European auto repair facility. Our skilled technicians have the tools, training, and knowledge needed to service and repair European vehicles, including Mercedes Benz. If your car is sagging from a failed air suspension component, give us a call or schedule an appointment online today and let us help get your car riding as it should!