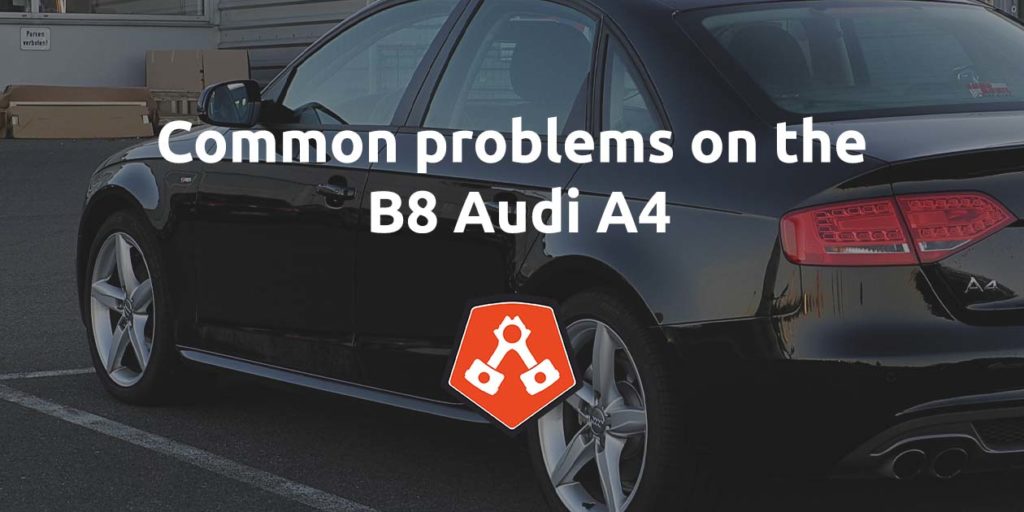 Common Problems on the B8 Audi A4

The B8 generation A4 first hit dealerships in 2009. This generation was much larger (5 inches longer, two inches wider, and a 6-inch longer wheelbase) than its predecessor and featured the updated version of the 2.0-liter turbo four-cylinder engine. The B8 went out of production in 2016, and used examples are becoming a very affordable option for a luxury and performance-oriented daily driver.

The B8 Audi A4 is a solid car, but it’s not without issues. If you are thinking about picking one up second hand, there are a few problems you should be aware of. Proper maintenance and care will address many of the problems on this list but ignoring them can lead to some expensive repairs. Here are the most common problems we see on the B8 A4.

The early B8 A4s equipped with the 2.0-liter engine were plagued with oil consumption issues. This issue had the largest impact on 2.0t engines from 2009 to 2011.5. There was a class-action lawsuit targeting the 2.0t motor with engine code CAEB, which was installed in the early B8s. It wasn’t uncommon for these engines to go through a quart of oil in between oil changes.

The oil consumption is linked to the PCV system and the piston rings. The first repair made by Audi after the settlement was replacing the PCV breather, lowering the pressure in the crankcase.

If that didn’t fix the problem, replacing the piston rings usually corrected it. The CAEB motor used different piston rings than other versions of the 2.0t from that era. A common fix is to use the piston rings from a Volkswagen GTI. The GTI engines did not have the same oil consumption issues as the A4. The upgraded piston rings reduce oil blowby, and as a result, the engine consumes less oil.

Excessive oil consumption can cause a variety of other issues. Low oil causes excessive wear and tear on the components in your engine and can lead to premature failure. It can also impact your fuel economy.

The timing chains keep the bottom end of the engine and the cylinder head in time, allowing the intake and exhaust valves to open and close at the correct time. The tensioner keeps the chain tight during operation, ensuring it doesn’t skip a tooth.

Similar to the oil consumption issue, timing chain tensioner failure impacted a lot of the early B8 A4s, mainly from 2009 to 2013. The tensioners were poorly designed and would often fail as soon as the vehicle was out of warranty. A failed tensioner would result in a slack timing chain, which would cause the motor to jump timing. Once this happens, the pistons and valves make contact and the motor is ruined. Audi offered a newer style tensioner upgrade to prevent a failure

At this point, a lot of B8 A4s have had the new tensioner installed. If you are buying a used one, be sure to ask whether or not the service has been completed. Buying a car with the original tensioner is a recipe for disaster.

Direct injection engines are known to suffer from carbon buildup on the intake valves. As this condition gets worse, you may start to notice misfires on cold starts as well as reduced fuel economy. Without proper carbon cleaning, the misfires will get worse.

Correcting carbon buildup can only be done by removing the intake manifold and manually cleaning the ports and valves. This can be done by hand or with a technique like walnut blasting or sandblasting.

Carbon buildup is an inevitable part of owning a direct injection motor. Getting a cleaning service done will help restore the performance of your B8 A4.

While conditions like carbon buildup can produce a misfire, the most common cause of this issue on a B8 A4 is failed coil packs or bad spark plugs. A good way to rule out whether a misfire is caused by a faulty coil pack or a bad plug is to determine which cylinder is misfiring (a code reader or VCDS can do this). From there, you swap the coil pack on the misfiring cylinder with one that is working normally. If the misfire follows the new cylinder, the coil pack is bad. If the misfire stays at the original cylinder, it’s likely a bad spark plug.

The high-pressure fuel pumps on B8 A4s are known to go bad, preventing your car from getting adequate fuel. Without the pump working properly, your car will run rough or not run at all. The only way to correct this issue is to get a new fuel pump.

Early B8 A4’s used Audi’s naturally aspirated 3.2-liter V6. This motor was relatively issue-free, but like the 4.2 V8, it’s derived from, had a very expensive timing chain replacement. The chains on this engine were on the back of the engine and could not be replaced unless the motor was removed entirely. A timing chain job on its own requires a lot of labor, but if you factor in pulling the engine and re-installing it, the cost for this service gets extremely expensive.

The majority of B8 A4s have 2.0T engines in them so this ultra-expensive service is not an issue, but for those who have the V6 version, it’s important to keep some extra money set aside to get this done.

Bring your B8 A4 to Alex’s Autohaus!

Our team knows the ins and outs of Audis, including the B8 A4. If you picked one up second hand and need to get some service done, give us a call or schedule an appointment today!