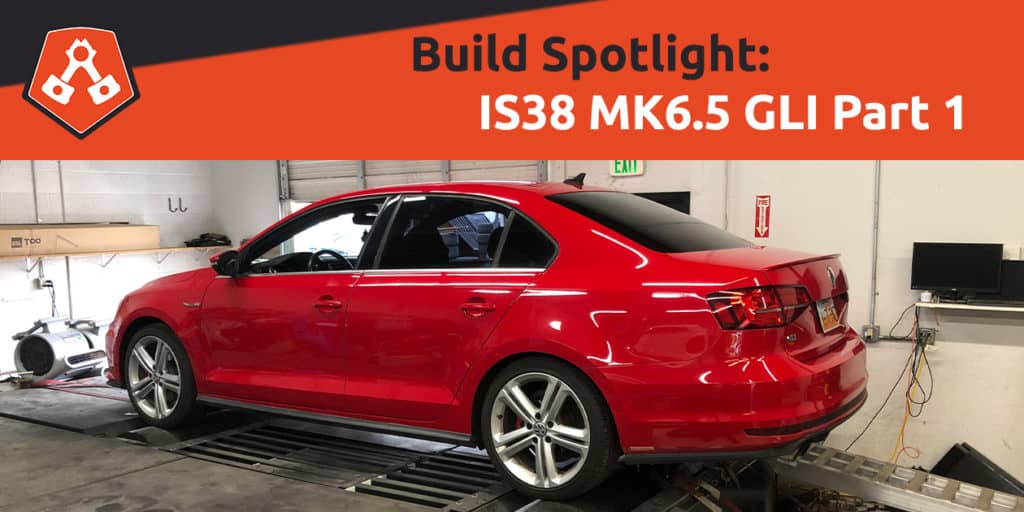 A long-term project we have been working on at Alex’s Autohaus is an IS38 turbo conversion on a MK6.5 GLI. This build is much more complicated than putting the same turbo on a GTI, Golf, or Alltrack due to the GLI’s unique differences and compatibility problems. This blog covers the hardware side of the build.

What’s involved in a standard IS38 swap?

The IS38 turbo came factory on vehicles with the high-output EA888 motor, including the Golf R, Arteon, and Audi S3. On standard-setup Gen 3 motors like the one found in the MK7 GTI, the IS38 is a direct bolt-on upgrade. Switching out the smaller IS20 for the larger turbo, installing a downpipe, and flashing the ECU is all that is needed to have your GTI making the same (or more!) power as a Golf R.

On the GTI and Golf R, both the IS20 and IS38 are oriented with the compressor and intake track on the driver side, and the exhaust turbine and downpipe on the passenger side.

What makes the GLI different?

The facelifted MK6 GLI sports the same Gen 3 EA888 motor as its GTI sibling. Like the GTI, the GLI came factory with an IS20 turbocharger. However, Volkswagen kept the general layout of the GLIs motor the same as it had been in the Gen 2 EA888, with the intake track entering the compressor on the passenger side of the car, and the turbine and downpipe are on the drivers’ side.

Because the turbo is reversed on the GLI, all of the charge piping runs in the opposite direction of all other Gen 3 EA888 vehicles. This creates an issue when upgrading to a larger factory turbo, because the GLI does not share the same bolt-up turbo compatibility as the hatchbacks, despite sharing the same integrated exhaust manifold.

The GLI’s cylinder head also lacks the variable exhaust timing of the GTI. This difference is somewhat restrictive on performance but does not impact upgrading to a larger turbo.

The biggest challenge in doing an IS38 swap on a GLI is reversing the direction of the charge piping. The factory charge pipes had to be removed from the vehicle and replaced with piping from a Golf R/GTI to route the air from the new turbo in a clockwise direction.

Once the turbo and plumbing were installed, the car hit torque restrictions due to fueling. The choice was made to swap the stock fuel pump out for a high-pressure unit from the Golf R. While the stock pump on a GTI can handle an IS38 upgrade, the factory pump on the GLI is different.

To support the additional power of the IS38, we installed a Wavetrac limited-slip differential and a South Bend Stage 3 Clutch.

On the dyno, the GLI made 346 horsepower and 417 lb-ft of torque. While the horsepower is down slightly from an IS38 GTI, the torque number is significantly higher, surpassing even a Stage 2 Golf R. The tuning is still being fine-tuned and will be covered in the second part of this Build Spotlight.

Have questions about your project? Give Alex’s Autohaus a call or schedule an appointment!