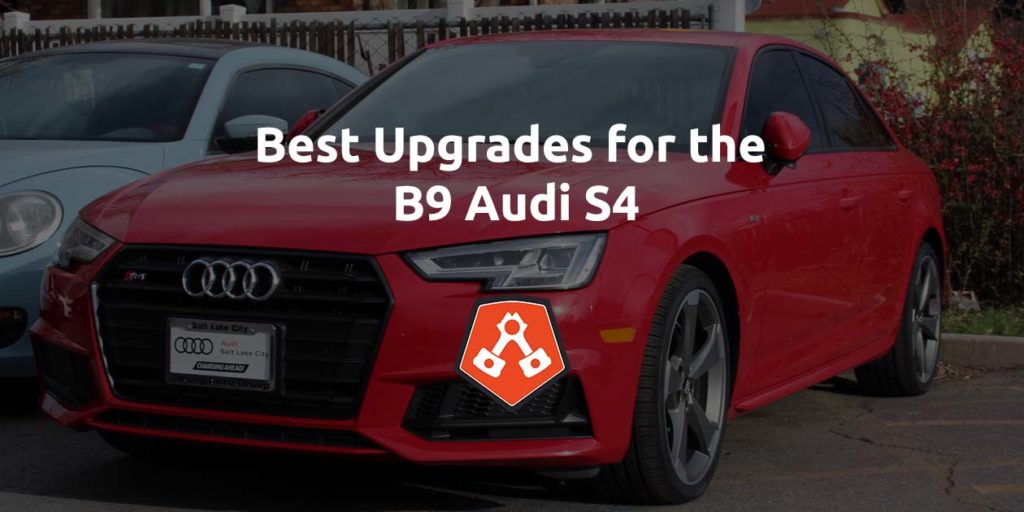 Best Upgrades for the B9 Audi S4

In 2018, Audi unveiled a new generation of the S4, the B9. In addition to completely overhauling the appearance and chassis of the car, the B9 brought the departure of Audi’s long-lived supercharged V6, which powered the S4 since 2010.

In its place is a single turbo V6 making 354 horsepower and 369 lb-ft of torque. This is the first time since the late 1990s/early 2000s that an S4 has been turbocharged from the factory. Being turbocharged gives this platform a significant advantage in aftermarket performance potential over the previous, supercharged generation.

The B9 platform has been around for a few years and has solid aftermarket support. Whether you are looking to squeeze out more power, or improve the way it sounds, looks, or handles, some upgrades can help you achieve your goal.

In this article, we are going over the best upgrades for the B9 S4!

Any forced induction vehicle will benefit from a software upgrade, and the B9 is no exception. Unlike the previous generation S4, the B9 is not limited by the rotational speed of a supercharger. As we see on nearly all turbocharged engines, the gains are substantial. A tune on an otherwise completely stock vehicle will increase output to around 400 horsepower and well over 500 lb-ft of torque.

Air intakes are one of the most popular upgrades. The power gains from an intake system tend to be minimal, in the range of 8-20 horsepower. Aftermarket intakes tend to flow significantly better than the stock box, which can reduce turbo lag and improve response. The real benefit of an intake system is increased engine/turbo noise and depending on the kit, some eye candy when you pop the hood.

The turbo inlet pipe sits between the intake system and the turbo, allowing air to flow even more freely into the compressor.

Upgrading to an aftermarket exhaust system will give your B9 a more aggressive sound. There are a variety of options to suit all tastes, whether you want a subdued rumble or an all-out roar when you step on the throttle. Some companies, like AWE Tuning, offer exhaust systems with cutouts that can be actuated from the driver’s seat, allowing you to toggle between quiet and loud with the push of a button.

Cat-back exhaust systems generally don’t lead to much of a power increase. While they do flow better than stock systems, the main restriction in the exhaust on these cars is the downpipe and catalytic converter.

To make more power on a B9 S4, upgrading to a less restrictive downpipe is required. The downpipe sites immediately after the turbo and houses the catalytic converter. Upgrading to a high flow downpipe requires an additional ECU reflash. This power/upgrade level is usually referred to as stage 2.

Keep in mind that modifying any part of the emissions control system makes the car unable to pass smog testing. Any car that has an upgraded downpipe should only be used on the track, not on public roads.

So far, we have upgraded the car’s software, intake, exhaust, and downpipe. All of the hardware we have added lives either before the turbo compressor or after the turbine. The intercooler sits between the turbo and the intake manifold, cooling the compressed air and increasing its density before it enters the engine.

With higher boost pressure from the tune, the intake air temperatures will be higher. With hot air being less dense, some power is left on the table when the stock intercooler is unable to keep up. This problem gets exponentially worse in hot climates, leading to a condition called heat soak.

Upgrading to a larger capacity intercooler will help with this problem, allowing your S4 to make consistent power regardless of outside conditions. A larger intercooler is required for cars over the stage 2 level.

The ultimate power upgrade for the B9 S4 is a larger turbo. Currently available upgraded turbos are capable of 700+ horsepower depending on fueling and other hardware upgrades. Hybrid turbos have the same fitment as the factory unit on the B9 but flow significantly more air.

There are a few hybrid turbo options, but the TTE 710 turbo has software support from both Integrated Engineering and 034 Motorsport and is currently one of the most tried and true options available.

So far, vehicles have been able to run at these power levels on a completely stock bottom end and cylinder head, which is pretty impressive.

A transmission tune is necessary to accommodate all that added power. Tuning the transmission is a very similar process to tuning the ECU, but instead of more power the transmission will shift faster, have better torque handling, and launch harder than it did in stock form.

Switching out your factory suspension for lowering spring or coil overs will greatly improve the way your B9 handles and looks. Suspension upgrades are even more important when you are making more power, as they can help you stay in control at speed (when you’re on the track).

When you are making more power, the factory motor and transmission mounts can lead to excessive movement under throttle. Excessive engine and transmission movement can negatively impact ride quality, handling, and acceleration. The factory motor mounts on the B9 S4 are fluid-filled, which means leaks are possible and the overall function of the mount is focused on comfort rather than performance. Upgraded mounts will typically be made of solid material with no fluid or voids.

While the factory brakes are solid, once your S4 is making big power you may need to upgrade, especially if you spend a lot of time on the racetrack. Big brake kits don’t make you stop faster, but they do a much better job at handling heat, and won’t fade or fail after repeated, heavy use.

Upgrade Your B9 at Alex’s Autohaus!

Alex’s Autohaus is Utah’s premiere Audi performance shop. From tuning services to engine builds, our skilled technicians and performance experts are here to assist you in getting the most out of our S4. If you are ready to take the plunge, give us a call and chat with one of our performance specialists today!